We are OPEN FOR BUSINESS, fully staffed, and ready to help our customers with any needs they have!

Menu
Skip to the end of the images gallery 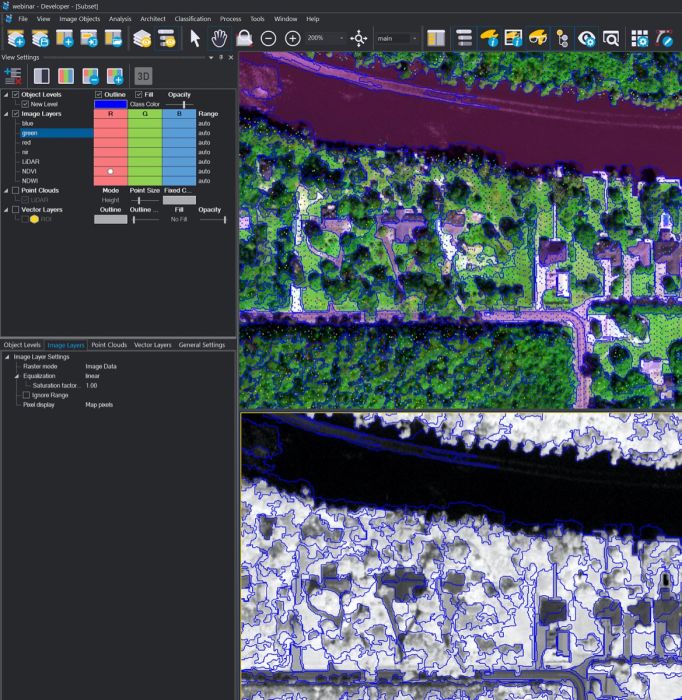 Skip to the beginning of the images gallery

Trimble eCognition enables you to accelerate and automate the interpretation of your geospatial data products by allowing you to design your own feature extraction and change detection solutions. With more than 20 years of feature extraction experience, Trimble have pioneered object-based analysis techniques and continue to push the envelope of data fusion and integrated analyses.

eCognition makes a radical departure from conventional approaches to data analysis due to its ability to emulate the human mind's cognitive powers and fuse geospatial input data. Using patented segmentation and classification processes, we have developed a robust method of rendering knowledge in a semantic network. The technology examines pixels/ points not in isolation, but in context. It builds up a picture iteratively, recognizing groups of pixels as objects. Just like the human mind, it uses the color, shape, texture and size of objects as well as their context and relationships to draw the same conclusions and inferences as an experienced analyst, but adding the advantages of automation and standardization. Though somewhat simplified, the following example illustrates the basic principles.

With the addition of a knife and fork, the circle is immediately recognized and classified as a plate. The circular object hasn't changed, but the human mind uses context and relationships with other objects to make intelligent inferences about the objects it perceives. And this is precisely how eCognition works.

eCognition classifies and analyzes imagery, vectors and point clouds using all the semantic information required to interpret it correctly. Rather than examining stand-alone pixels or points, it distills meaning from the objects' connotations and mutual relationships, not only with neighboring objects but throughout various input data.

Of course, it also recognizes pixel information. Machine learning and deep learning approaches can be easily integrated into automated workflows. However, it adds significant value to this information by creating a powerful cognition network in a series of iterative segmentation and classification steps.This dramatically enhances the value of intelligence and information extracted from the data. What's more, the extracted information is fully quantified and qualified to meet the user's specific demands.

To build an analysis solution, it is possible to flexibly combine the image interpretation steps like object creation (segmentation), object classification (knowledge based, fuzzy logic, machine learning), object detection (template matching) and object modification (fusing, smoothing, orthogonalization, simplification) into a Rule Set or even a new application (Rule Set with UI) to solve the analysis problem. The result is a unique approach to translate mind models (why a human interpreter can see the objects, changes, or features in the geospatial data) into computer understandable code (Rule Set) or an individual/customized application.

eCognition can fuse a variety of geospatial data, such as spectral raster data, 3D point cloud data and thematic data from GIS vector layers.  Images can speak to point clouds, vectors to images and all three to one another. User can leverage the full power of their input data independent of data type and source.

Trimble eCognition is an advanced analysis software for geospatial applications. It is designed to improve, accelerate and automate the interpretation of a variety of geospatial data and enables users to design feature extraction of change detection solutions to transform geo-data into to geo-information.

The eCognition Suite offers three different components which can be used stand-alone or in combination to solve even the most challenging image analysis tasks.